You Can Find LOVE Here

Happy Valentine’s Day Everyone! Have a great weekend.

It’s that time, when I sit back and reflect on the year that’s behind us and the work that I’ve done. I’ve been fortunate this year to have had the opportunity to do quite a bit of travelling and to document those places with my camera.

It’s also been an incredibly busy year both on the home front, at work and photographically speaking. Earlier this year I launched a pet photography business,  PhoDOGraphy by Edith but at about the same time I did that things started really heating up at work which left me with less time then I had hoped to start building my business and marketing it. I intend to change that in 2015. On the positive side my print sales were up this year and I was fortunate  to have some of my images licensed for book covers and fundraising events.

I’ve become more critical of my work, which I think is a good thing and I’m always looking to change and improve, which in essence helps you grow both as a photographer and as an individual. This year I became a member of Professional Photographers of America and I will be attending their Imaging USA conference in Nashville at the end of January. This will enable me to immerse myself in 3 full days of learning the business side of photography, photographic technique and post-processing techniques.

I always find it difficult to narrow down a years worth of work into my “favourites” but here it goes. Grab a cup of coffee and enjoy 🙂 You can click on any of the headers to view the original blog posts.

Down Under the Manhattan Bridge

Over Christmas and New Years last year we took a family trip to New York. As I always do on family trips I try to find some time to sneak off and take photographs. We were staying with family in Brooklyn and I had to opportunity to explore DUMBO quite a bit. This was one of my favourite shots from Down Under the Manhattan Bridge Overpass.

City on the Edge

This was taken on the same trip but along the Brooklyn Heights Promenade.

We had a very different winter last year. We were hit by an ice storm in Toronto just before Christmas and the months of January and February we saw most days in the -20C range. One very cold February day I decided to start experimenting with some macro photography and oil and water. I really liked the final result. 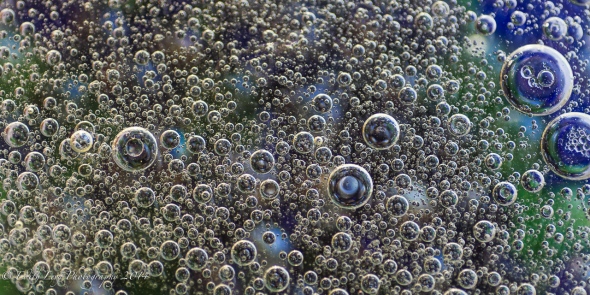 I did end up braving the cold one weekend and headed out to photograph dog sled races in Cannington, Ontario. I’ve always wanted to do that and wasn’t going to let the -12C forecast get in the way. I bundled up tight and headed out….brrrrrr!

Last March I attended a Pet Photography workshop in Houston, Texas given by the Paw Print Divas. It was an incredible experience and I learned a lot. It was also he first time I had attempted pet photography in a studio and fell in love with the process and the control that I had over the setting and lighting. This is Gilley.

Here’s another favourite from the workshop. This is Jiff!

Watch Out for the Jellies

Toronto’s newest attraction open last year, Ripley’s Aquarium and I joined my camera club for a photo outing there. It was a tough shoot due to the lighting conditions but the Jelly Fish exhibit was my favourite.

In April I once again attended a photo outing with my photography club, this time to the Toronto Centre for the Arts. This was taken from the upper lobby and I loved all the converging lines.

The month of May found me travelling to Israel, for a family function, with a side trip to Petra Jordan. This image was taken in the old city of Jaffa.

The best views of Tel Aviv are from a top the hills of old Jaffa.

A First Look at the Treasury

Petra is a place that I’ve been wanted to visit for a very long time. I flew from Tel Aviv to Eilat in the south and then walk across the border (yes walked) and then I boarded a bus a drove 2 hours to the ancient city of Petra. It was incredible! It was another hour-long, hot walk in the desert before getting to the Treasury but it was well worth it. 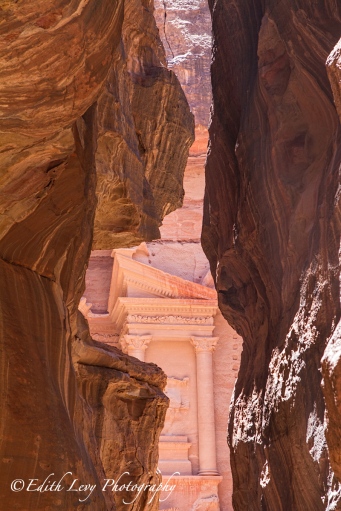 This year I celebrated a big birthday and when my wonderful husband asked me what I wanted for my birthday I promptly answered that I wanted to go back to Italy…what else. As an extra treat we stopped in Paris first for a few days. The images I took in Paris and Italy are some of my favourite and it was difficult to narrow it down. This one was taken on our first night. We were exhausted from travel and jet lag and sunset that evening was at 9:53pm but I wasn’t going to miss photographing the Louvre at night. 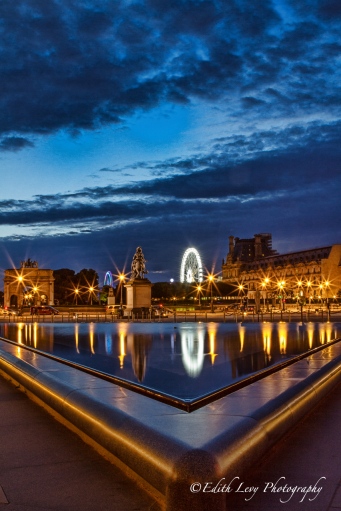 You can travel to Italy every year and still not see all its beauty. With the exception of Rome every place we visited this year was new to us. One of the towns we visited was Lerici. We stayed in a wonderful hotel over looking the Bay of Poets and it was one in many spectacular views we enjoyed on this trip. 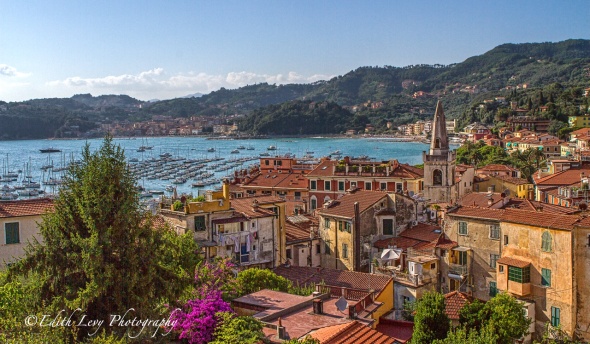 Lake Como is a place that I’d wanted to go to for a very long time and it was our first stop when we arrived in Italy. We stayed in Bellagio with its narrow, multi-stepped streets.

Our base in Cinque Terre was Manarola.

This is one of my favourite images that I came back from Paris with.

Tourists at the Louvre

Some images just work better in Black & White and these tourists strolling through one of the many arches at the Louvre fit the bill. I love how having the tourists there really gives you a perspective on the scale of those arches.

Nothing says Tuscany more than rolling hills, hay bales and cypress trees…oh and wine of course but you can’t see that in the image 😉

This is one of my favourite images that I took at a shoot at Toronto’s Distillery District this fall. 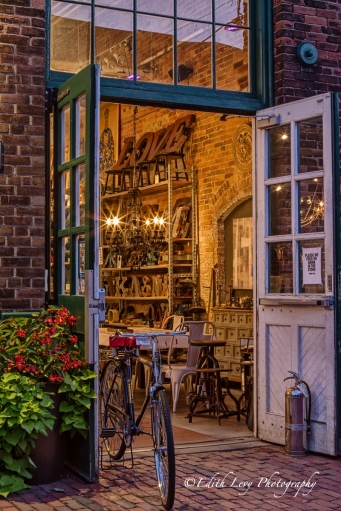 So this is it folks, Happy New Year to you all. I look forward to seeing what 2015 brings.

James Worts emigrated to Canada from England in 1831 and established a grist mill (a mill for grinding grain). He was soon followed by his brother-in-law, William Gooderham who was a successful merchant in his native England. William decided to invest in James’ mill business and thus the Gooderham & Worts partnership was born. In 1837, spurred on by the increase in grain production at Upper Canada farms, William decided to add a distillery at the mill and that year their first whiskey was produced. The distillery prospered over the years and the business grew to included a cooper shop, storehouses, a dairy, flour mills and a wharf.

World War 1 had an almost ruinous effect on the distillery and just as things were starting to get back to normal Canada’s short-lived prohibition in 1920 brought alcohol production to a halt.

Throughout the 20th century the distillery would have new owners and continue to thrive producing rye whiskey and then rum. After 153 years of continuous production the distillery closed in 1990. During the 90’s the distillery found new life as the number 1 filming location in Canada and the second largest outside of Hollywood. In total 1700 films were shot here among the gorgeous Victorian architecture. The 2002 musical, Chicago, was filmed here and one of the buildings stood in for  Cook County Prison.

In 2001 the Distillery was purchased and an ambitious restoration project ensued.  The Distillery Historic District opened its doors in May 2003 and is today one of the most popular areas in Toronto.

Click on the images to view a higher resolution version or to Purchase a Print. 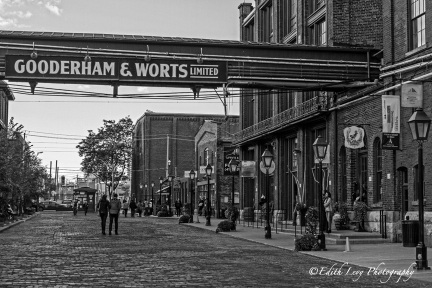 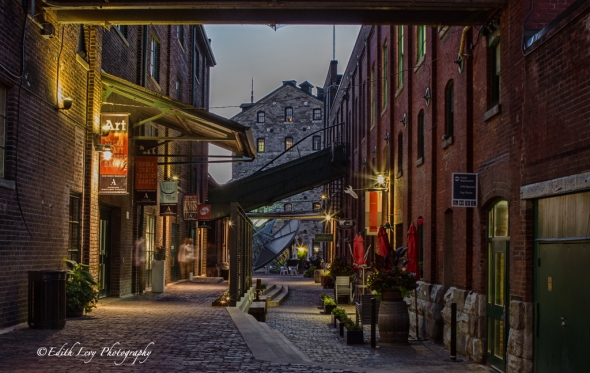 As some of you may or may not know I’m a member of a photography club and in late September some of the members met at the Distillery District for an evening photo walk followed by dinner. I’ve been to so focused (no pun intended) on my images from Italy that I didn’t get a chance to process my images from that outing until this weekend.

There’s still plenty of Italy images that I’ll share but thought I would take a break this week and share a few images that are closer to home.

The Distillery is located east of Downtown Toronto and displays the best preserved Victorian Industrial Architecture in North America. I’ll share more of the history of this wonderful place  in my next post.

Click on the image to see a higher resolution version (it really does look better) or to Purchase a Print.

As I sit here preparing this post I’m looking out my window, the sun is shining and it doesn’t look like we’re going to have much of a white Christmas here in Toronto. We had a dusting of snow in the city a couple of days ago and that’s about it but it has been cold so I am looking forward to getting away to a bit of warm weather later this week.

Just a quick post today to wish you all a Happy Holiday and Wonderful New Year. I’ll be back mid-week with a recap of my favourite images of 2012. 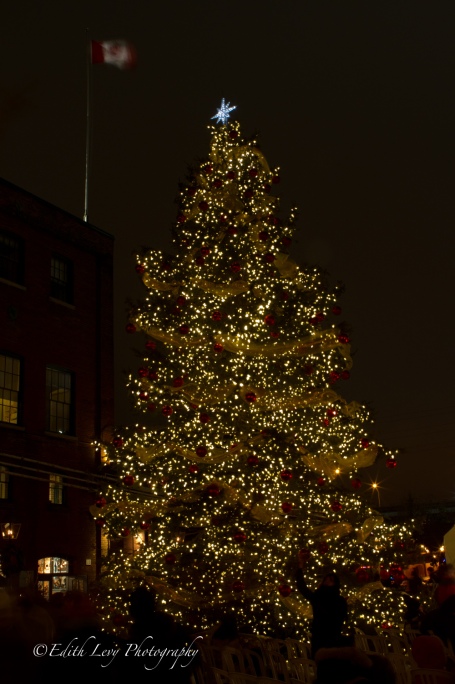 Dodge at the Distillery

I hope everyone had a great weekend. I tell you with the holidays coming up so quickly life has gotten even more hectic than usual.  Today’s shot is another one taken last week at the Christmas Market at the Distillery District. These old dodge automobiles are all over the Distillery District. I had to squeeze myself and my tripod into a tight corner to get this angle so that I could include all the awesome christmas lights.

I actually converted this to a B&W image as well and asked my husband’s opinion on which one he liked more. He picked colour. I’ve upload the B&W version to my Facebook Page. Have a look and let me know what you think.